It is March and the temperatures are close to zero degrease when we have started our trip from Hamburg to Sondervik.

We have rented a house very close to the North Sea with a wood-burning fireplace inserts.

Sondervik is located at the west side of Denmark at the top of the Ringkjöbing Fjord.

After having put all of our things into the house we start a short discovery tour to the nearest trout lake. 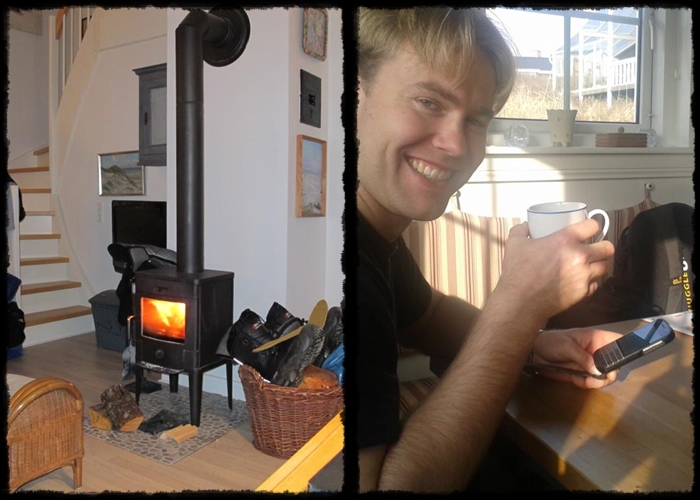 This lake is only 5 km away from our house.

It is a nice small lake and of the first water.

Next day we take our light tackle equipment and go straight to that lake.

We buy a ticket for two hours.

At the first place close to the parking area we have started using small spinners but without any success.

After a short while we try a new spot at the end of the lake directly in the teeth of the wind.


Very fast we have learned that the trouts are located at a single shallow spot.

We are still using small spinners and we catch trout on trout like never before.

As a result we can count 16 nice trouts within 1,5 hours and we do not want to talk about all the strikes that we have missed –
trout heaven – light-tackle fishing at the top of the line! 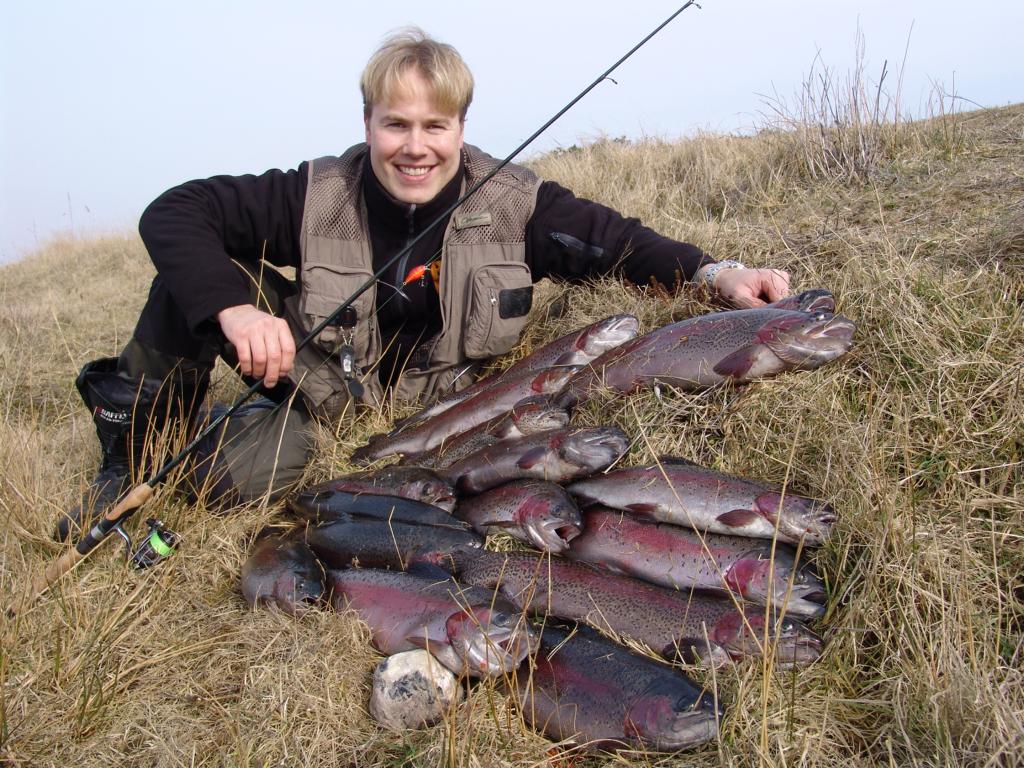 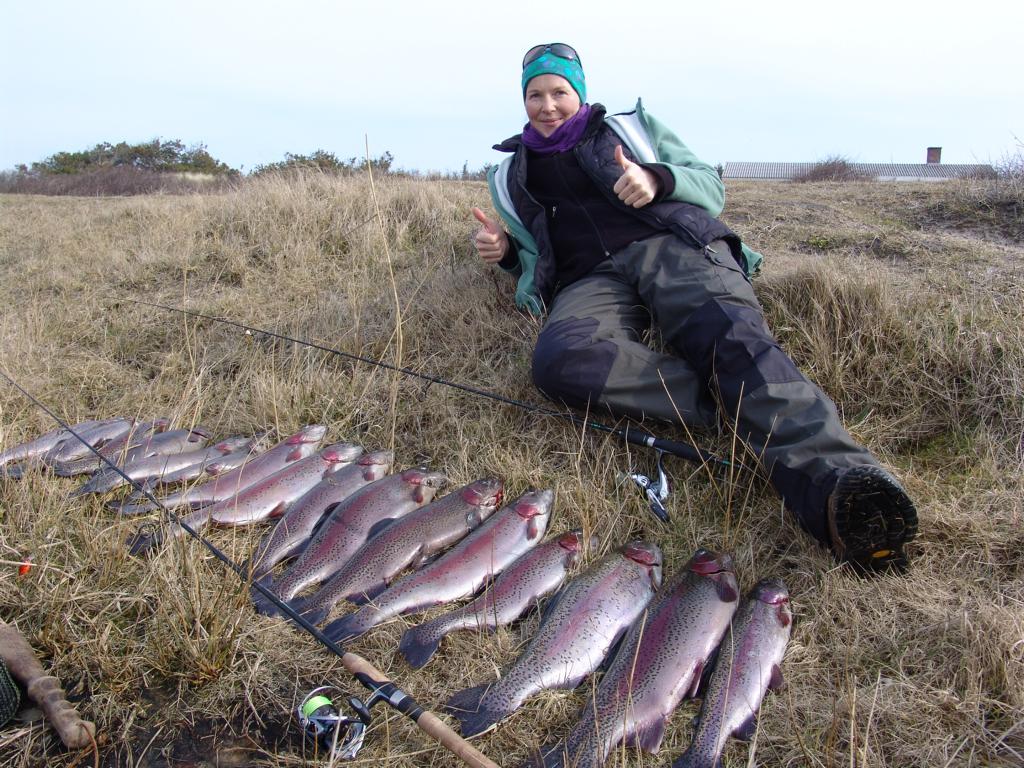 The next day we make a stop at the put and take lake „Oxriver,“ a place with some more lakes and a huge river system. 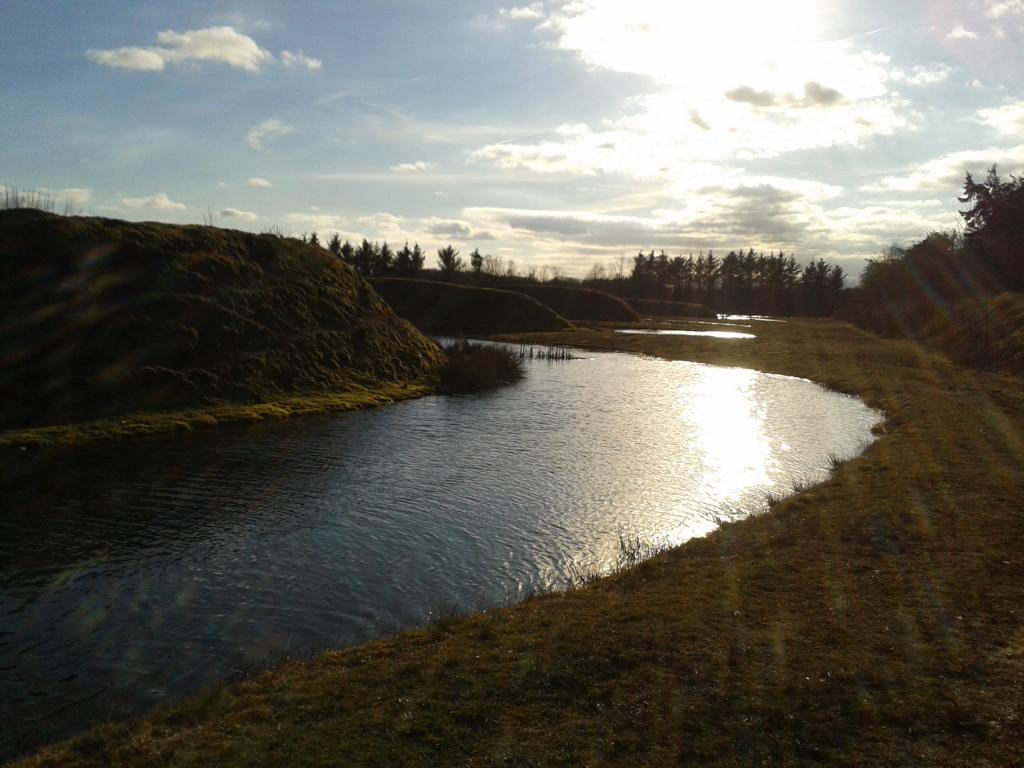 For Danish affairs a small trout but a strong fighter.

Within the next two hours we catch 6 nice trouts and we have missed a few strikes before we have gone home again. 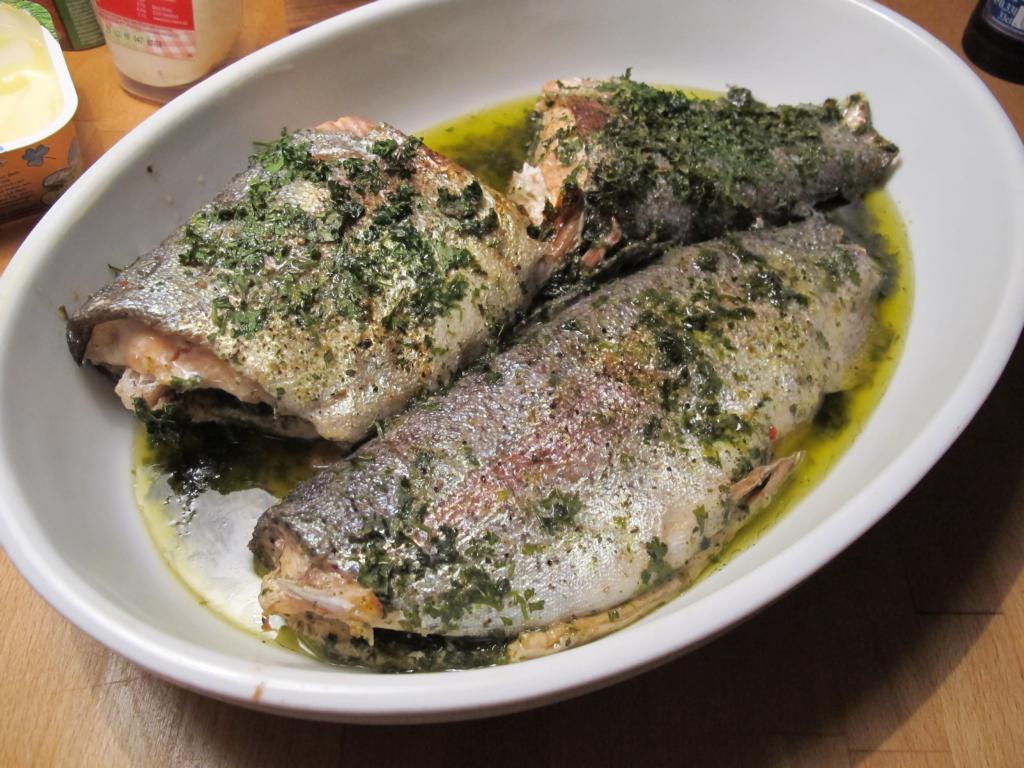 Maybe it is possible to get some other kind of fish, not only trouts?

Big pikes? After having seen those pictures of very big pikes we make up our mind and say to ourselves that we have to try it.

Sünje has brought some Kopytos from home but I have not expected any pikes at all.

In the evening we celebrate the new friends (lures)! 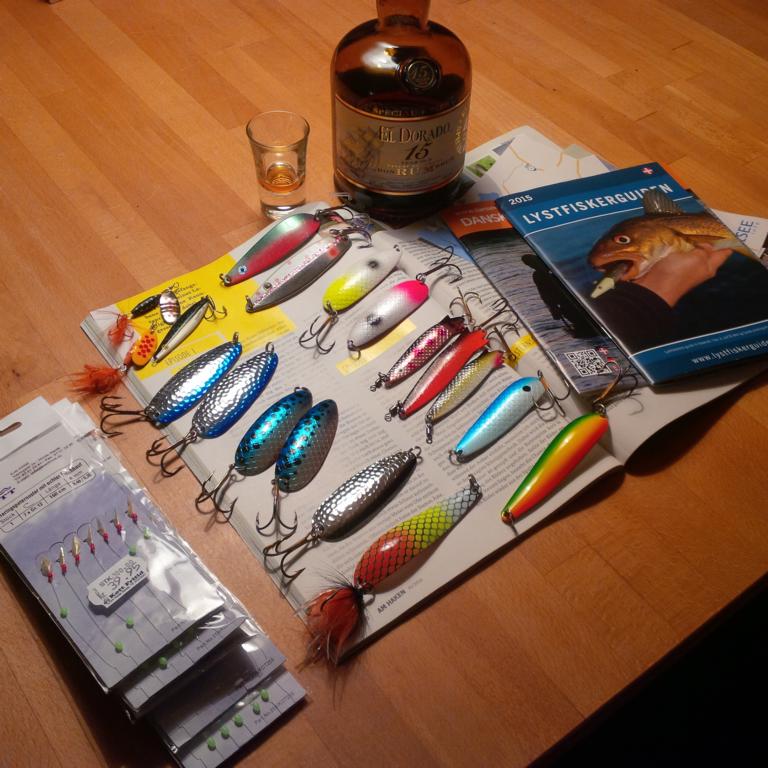 Starting pike fishing at the following day we have visited some spots that we have marked on google maps the previous evening.
The thermometer shows + 1-2 degrease.

We have fished quite a few spots before Sünje got the first strike!

Ok, I agree, it is not a 10 Kg + pike but at least it is a pike of 40cm and conclusively we know that it is possible to fish pike in these waters.

Sadly we catch no other pike in the following two hours. 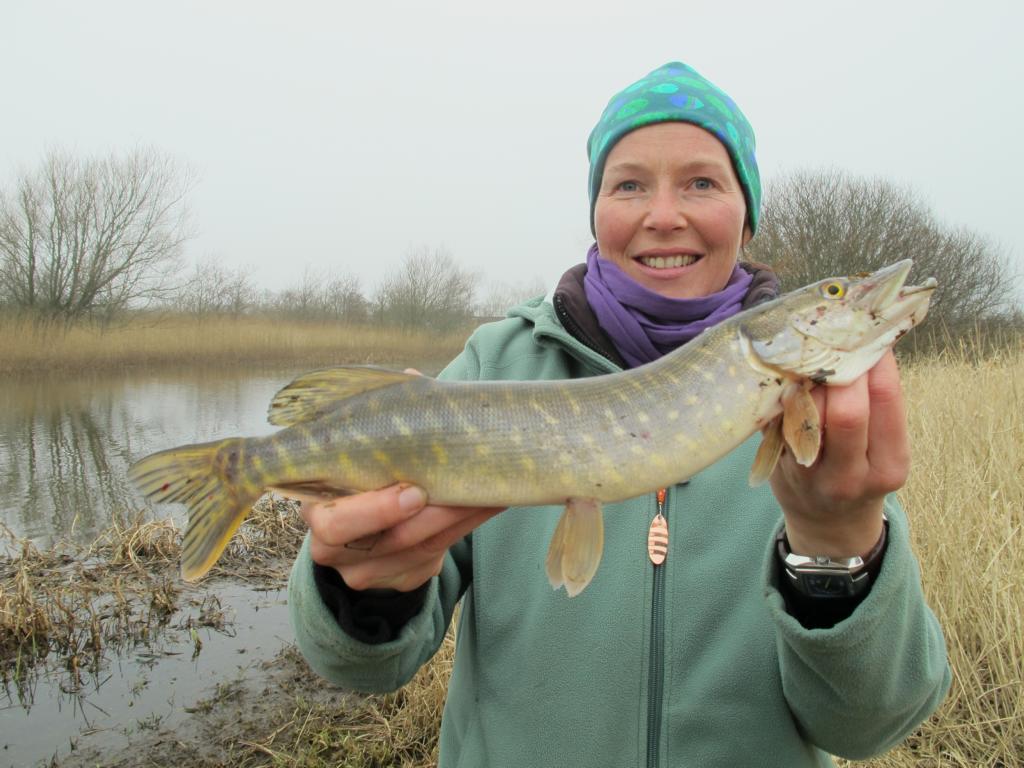 The following days we fish on different trout lakes at the east side of the Ringkjöbing Fjord with great success.

We catch some really decent fish up to 4,5 kg. 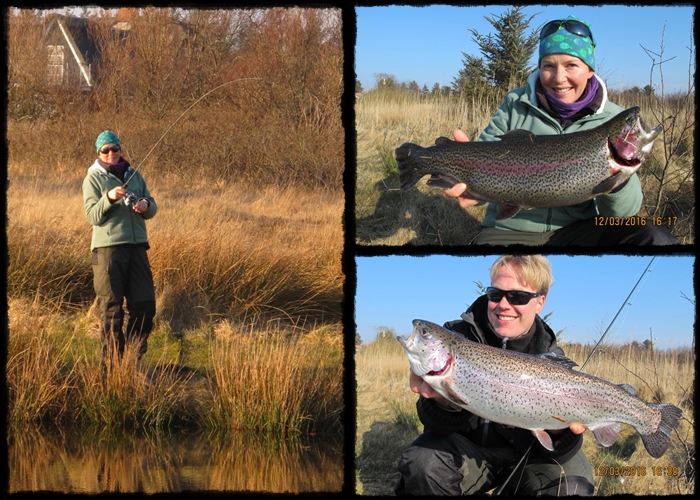 We are using flies – mickey finn colours, small spinnerbaits and crankbaits from Illex. 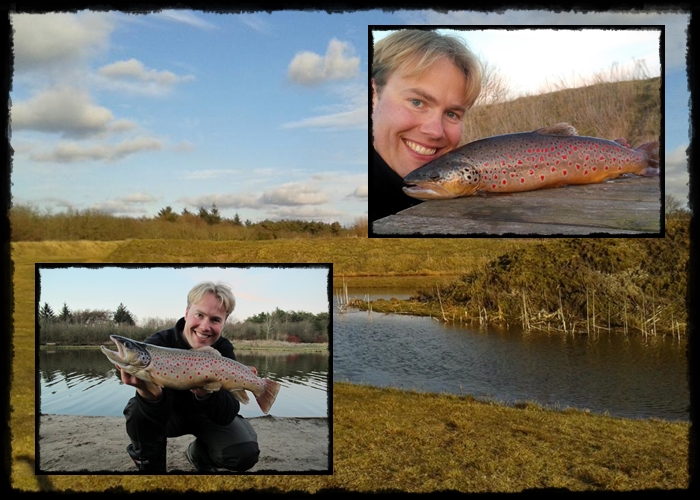 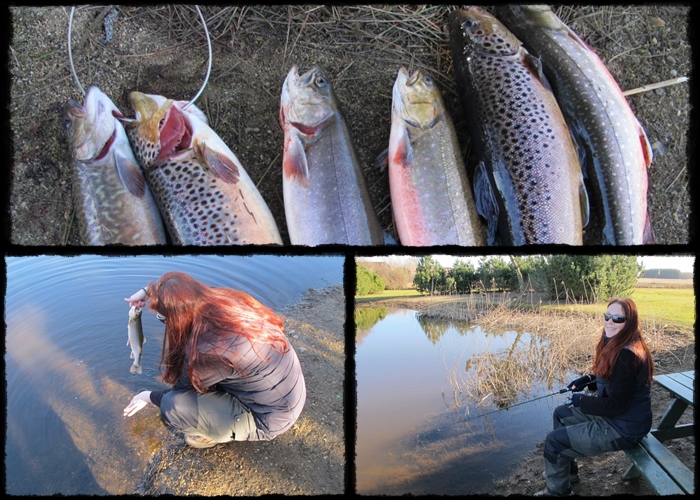 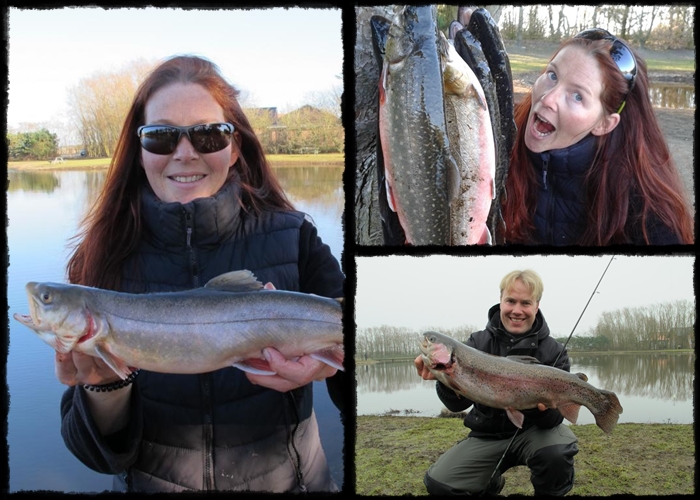 Additionally we try to catch some herring and plaice at the watergate at Hvide Sande.

Again – sadly without any success but maybe it is because of all the seals that are playing around and eat the fish before they can strike our lures? 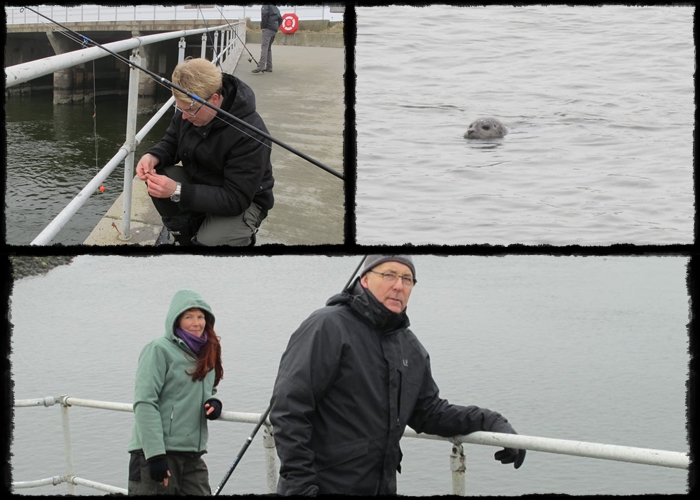 Time passes by and the week is about to end.

Nevertheless we have caught 61 trouts and chars, one pike and three roach. 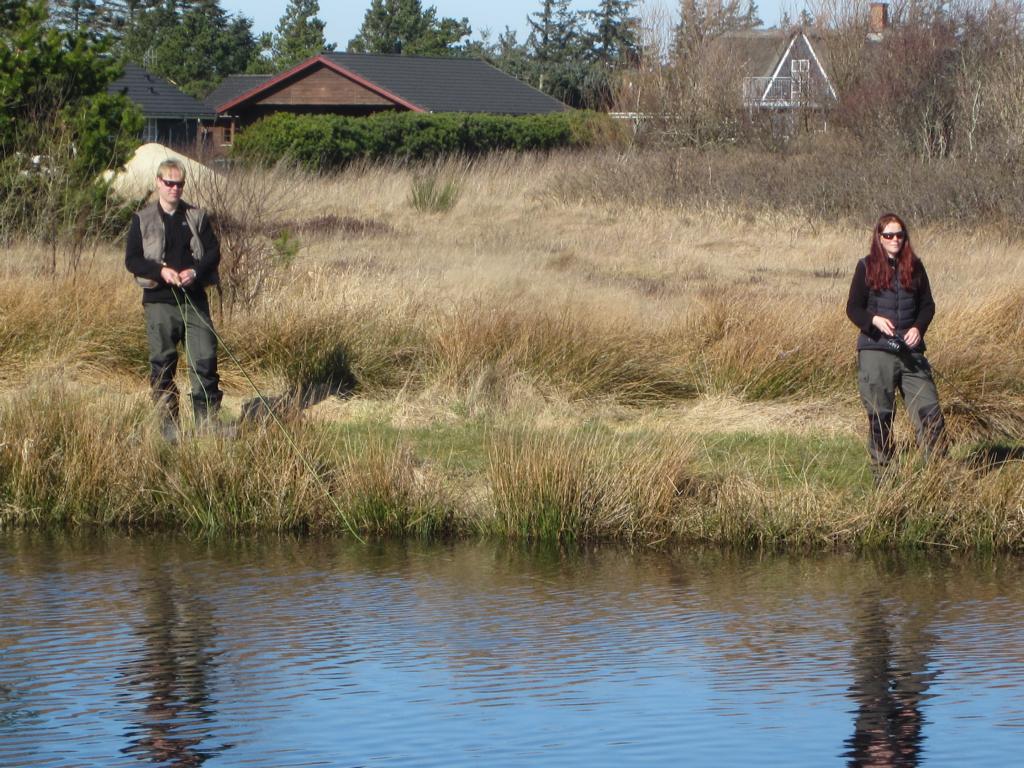 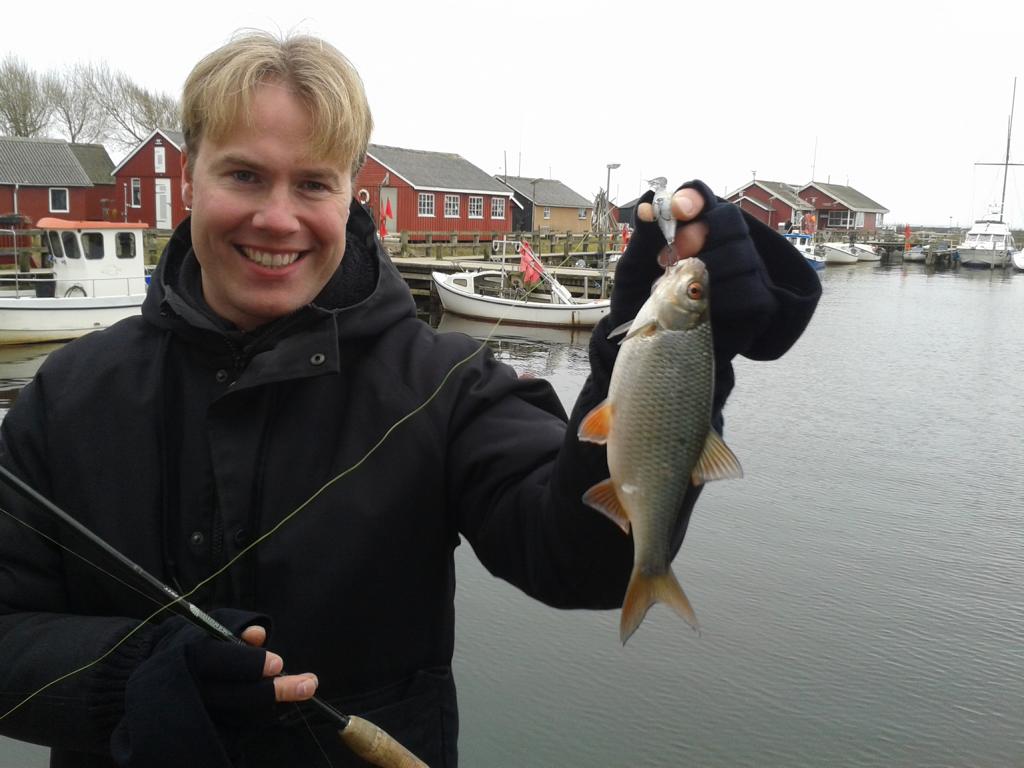 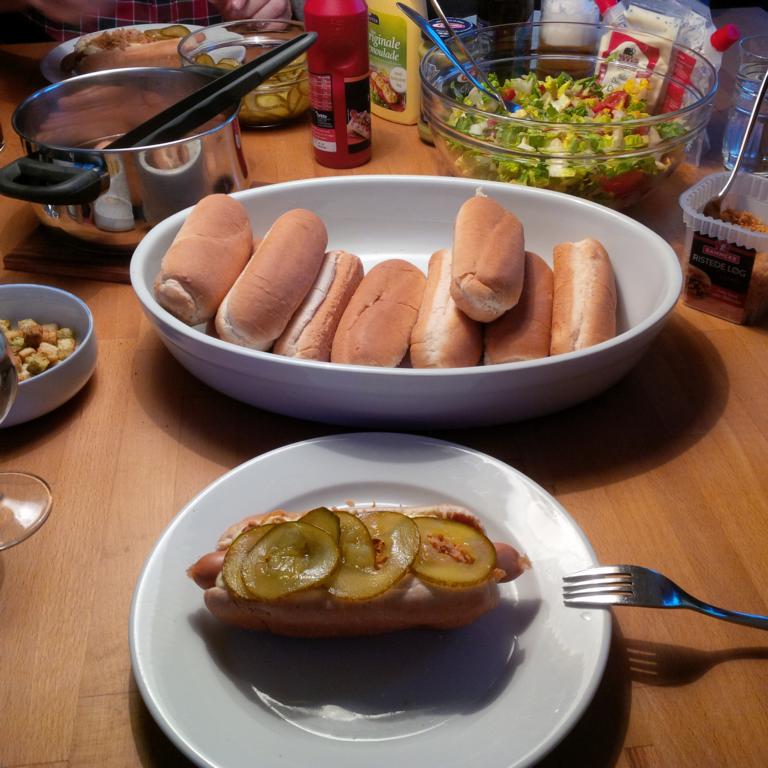 To sum up we have spent a nice week and for sure we will meet again at this nice place in Denmark.