We started the trip on the afternoon Thursday 12.th of June, travelling 510 km north of Stockholm to Gimån, me , Henry and Henrik.
The housecar was prepared with all necessary stuff like beer, whisky, cookies and some flies for fishing as well.

We arrived late on the evening and went out looking on the stream which looked very nice! 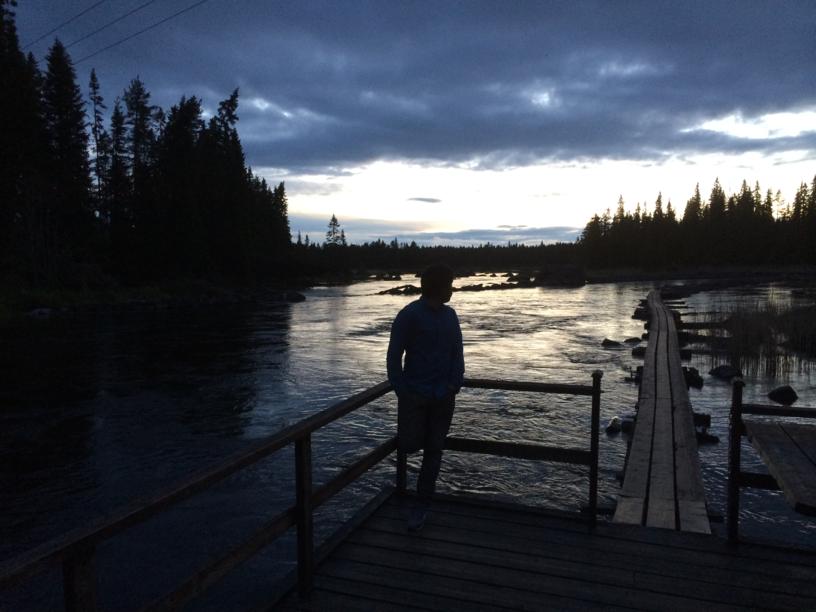 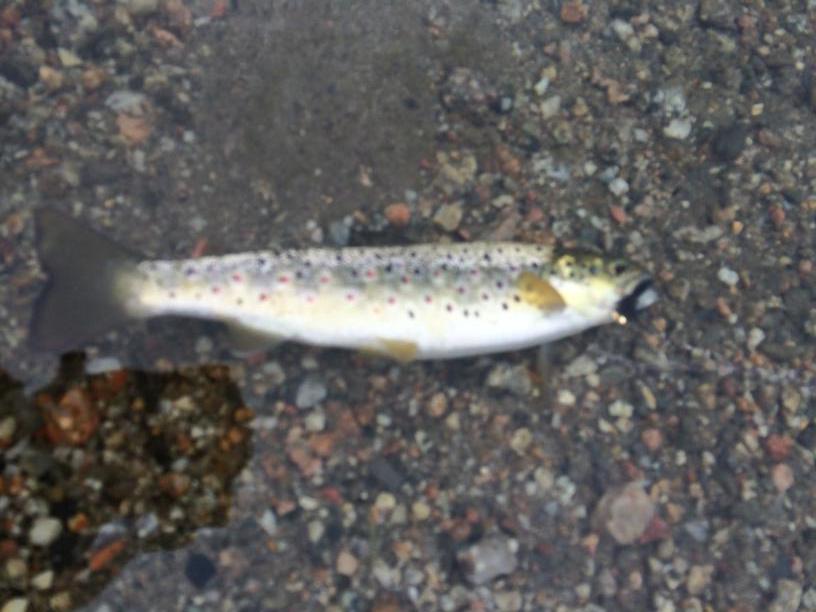 During the beginning of the day we got some nice greylings/harr and I landed one big grayling/harr over 55 cm.
We had some insects which where hatching during this time so the air was full with some type of mayflies
and during some periods the fishes went crazy on the surface which gave us a fantastic experience and fishing! 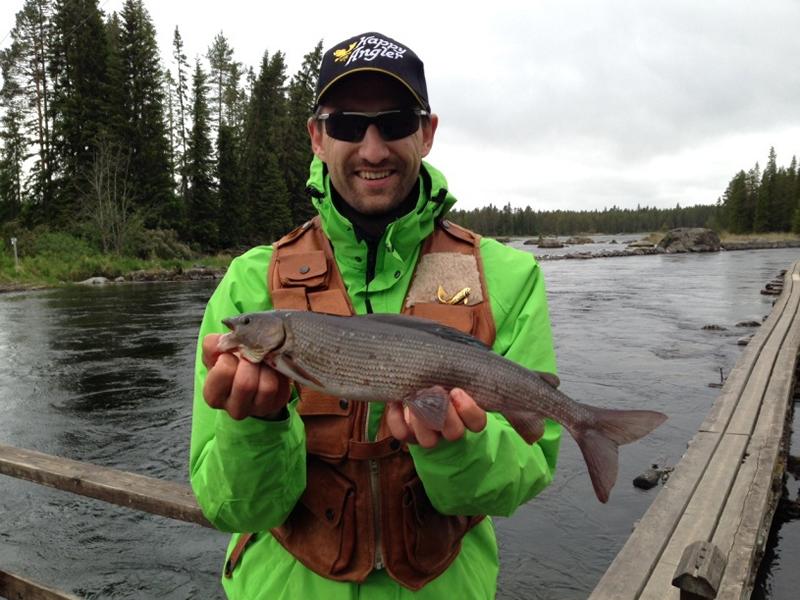 Before lunch I got another big grayling/harr which we decided to take up and eat since none of us have ever had eaten grayling/harr
and we wanted to try it, and this grayling/harr also had over 55 cm. 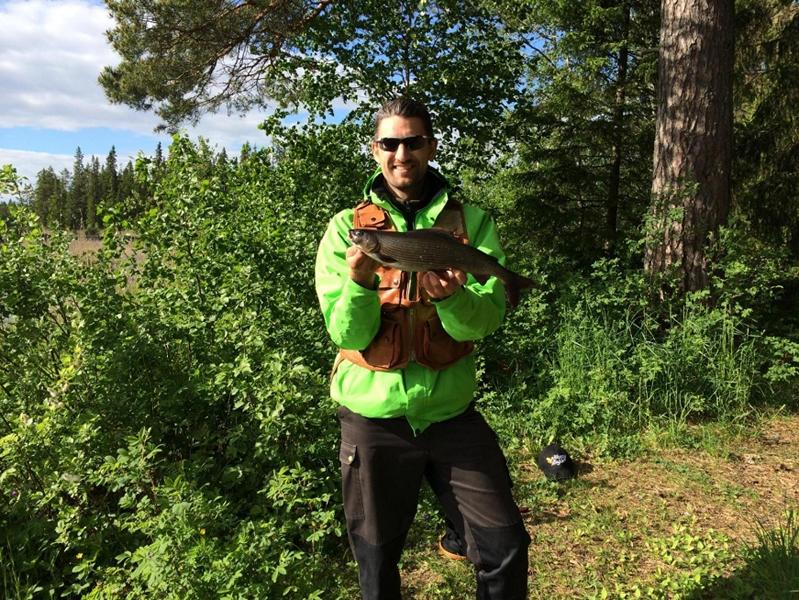 We made up a nice fire and fixed the fish with salt, pepper, lots of butter and fresh lemon.
The fish was very nice and we thank Mother Nature for this delicate experience. 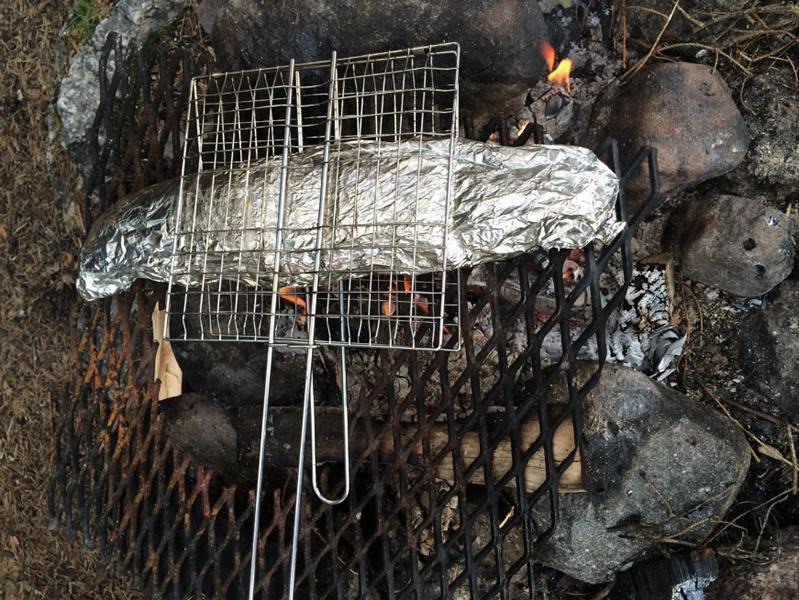 Of course we kept on fishing for the whole day and we had very strong wind, 8m/s and stronger in the tops, north of course so it was cold and nice…
And in the afternoon Henry caught the biggest catch of the day! 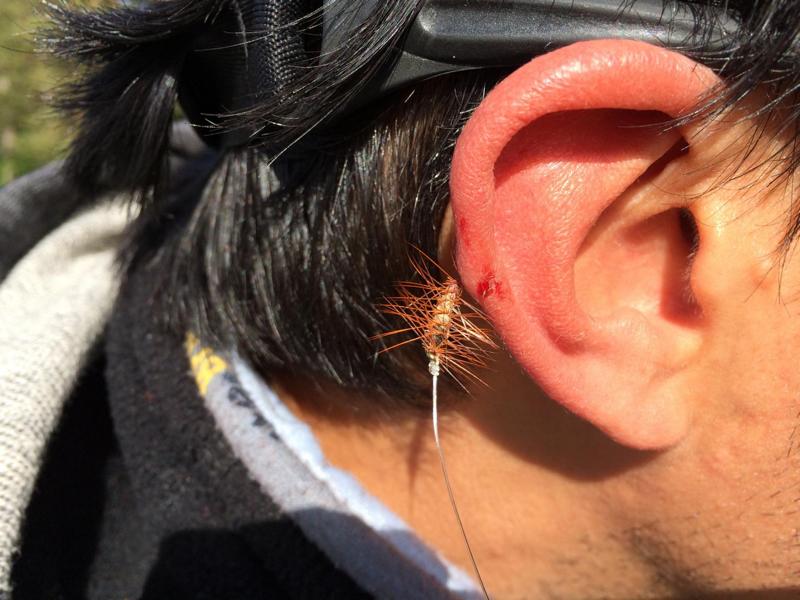 A nice pierced ear with a superpuppy, bringing out the tongs and begin the surgery!
We got it out very easy which was good and the fishing could start again!


During the afternoon we got some smaller fish but later in the evening I got a nice strong bite and the fish went crazy on the surface jumping
in all direction and then went down in the stream.

It was a long nice fight and while the fish was down in the streaming water it was almost impossible to give it any pressure for taking it in without
breaking the line.

When it wanted to stand still it was standing still!

Finally we got it up and it was a nice river trout of 1.8 kg approximately, we took some nice pictures and then we let it swim back into the stream.

After this fight we decided to fix some food and I had prepared a nice Wild boar stew which we put on the fire and had a very nice dinner talking
about the fishing during the day and drinking some beer and whiskey. 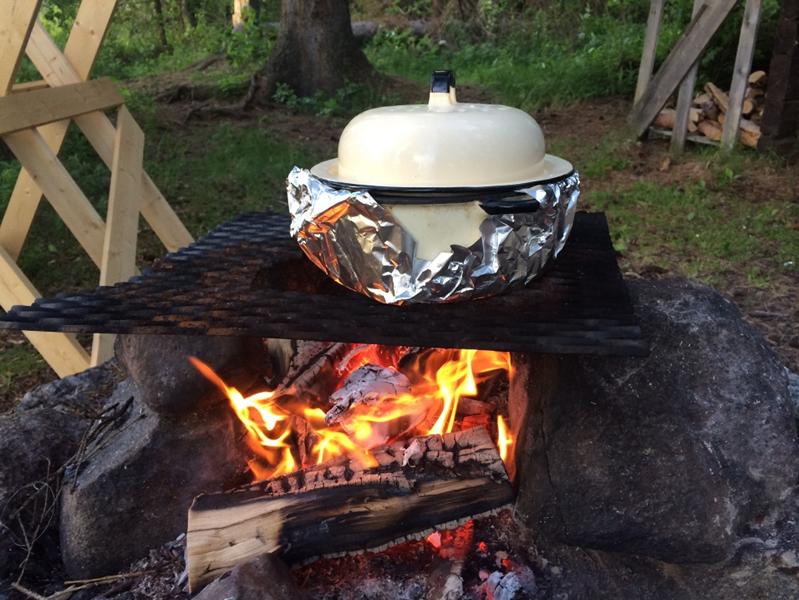 After the dinner we went out for some more fishing but the clock was starting to get late and we decided to go to bed and recharge the
muscles for tomorrow. 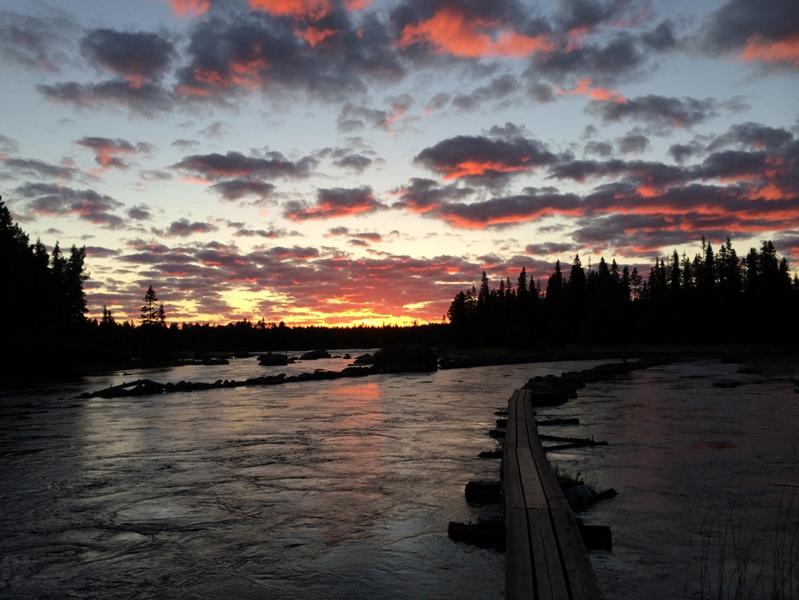 It was a very nice finish of the fishing day with a big river trout, dinner and of course some pain in the arms.
After watching the sun go down over the river we went to sleep and after 5 minutes everyone was sleeping like a baby.

Day 2 we had another area to fish in, with more rocks and pools which was a bit more tricky to fish and difficult. 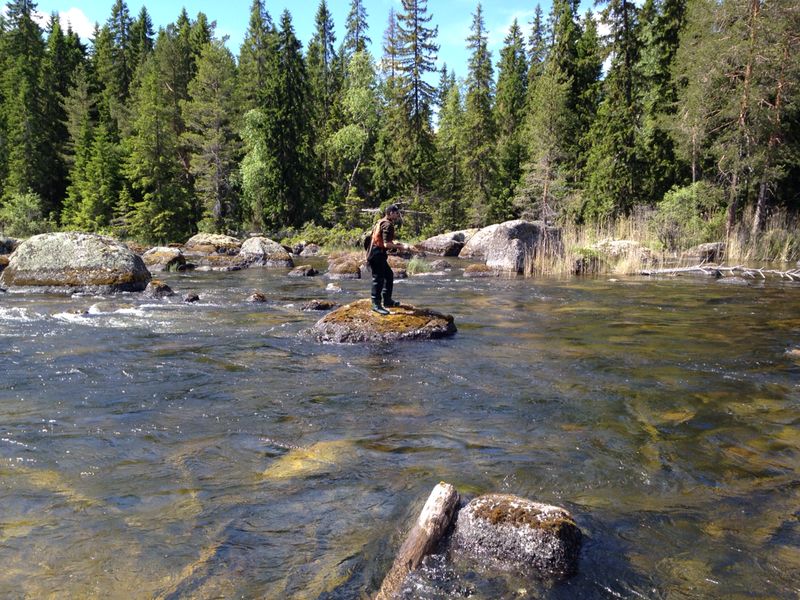 We got some greyling/harr and river trout but not so big as the day before but more smaller fish and greater natural experience since
we more out in the stream this day climbing rocks and almost falling in the strong stream. Luckily no one had to swim in the wetsuits this time! 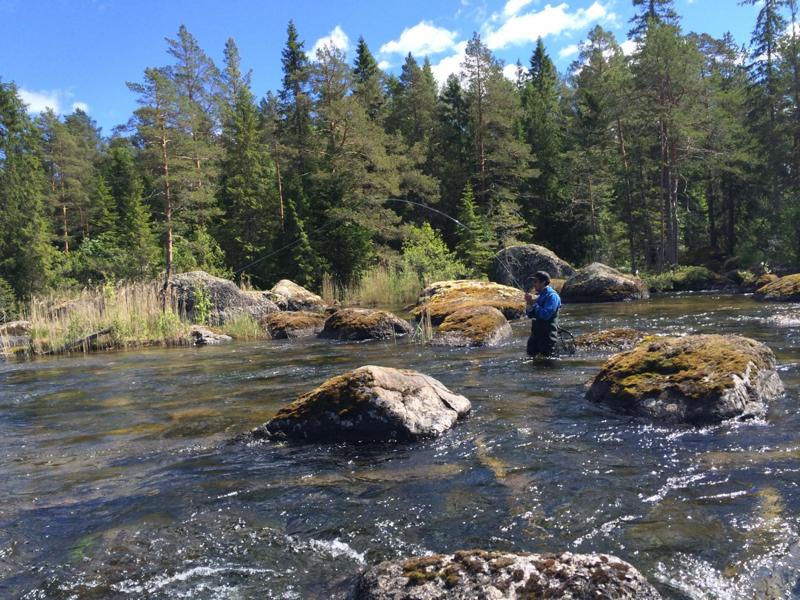 He got it up and it was a beautiful colored grayling/harr which shined epically in the sunlight! 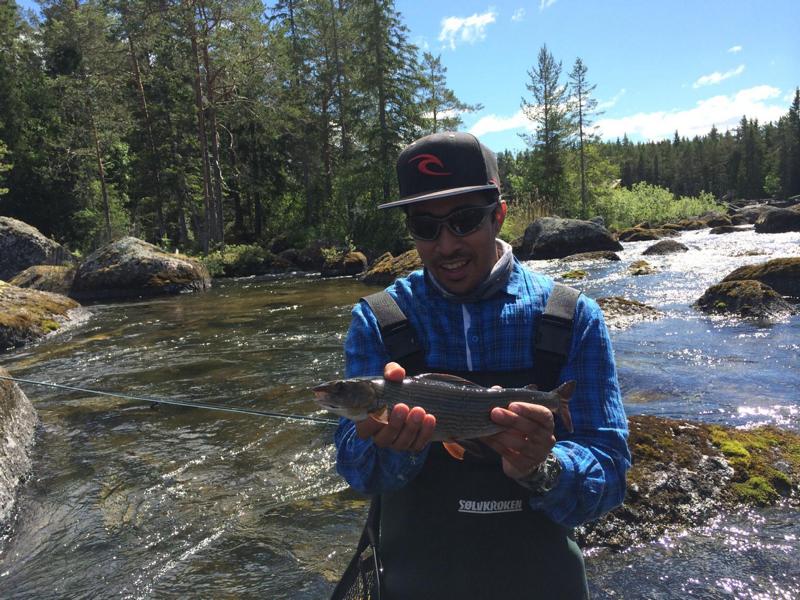 After this we got some smaller fishes and also lost some pretty decent fish during the day but we had a really nice time in the stream sneaking
behind stones, crouching through the reed and laying out flies in different pools trying to lure the fish to bite on them.

The weather was nice but quite windy and cold despite the sun which was shining almost the whole day.

The day after we tried another area which we didn’t know anything about, we found out that it was a calmer part of the stream,
with not so strong streaming water which was good for pikes.
We didn’t bring any pikeflies with us on this trip but we tried it some but where not so lucky.
Henry had a big streamer on and had one fish on, we believe it was a pike since after 30 seconds of fighting the fish cut the line straight off.
That was unfortunately the only bite this day so we decided to pack up our gear and go home and so we did.

We said goodbye to Gimån for this time and we hope to see you again soon for more some nice fishing adventures!